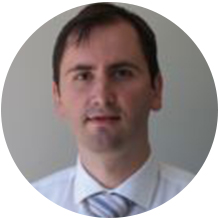 Born in 1977, at Cluj-Napoca, Daniel FODOREAN is Associate Professor at the Electrical Machines and Drives Department, from Electrical Engineering Faculty of Technical University of Cluj-Napoca (TUCN). He obtained the Banchelor and Master degrees in 2001 and 2002, respectively, at TUCN. He had his public defense of the PhD report in 2005, at the French university Universite de Technologie de Belfort Montbeliard (UTBM). At UTBM, Daniel FODOREAN also worked as Assistant (2004, 2006) and Associate Professor (2007-2009). He was involved in research activity at Siemens Industry Software company, from Leuven-Belgium (3 months), and at Brose company, from Wuerzburg-Germany (2 months). He was also trained in Real-time operation of electrical machines and drives based on dPSACE platforms (3 courses, at Paderborn and Wuerzburg, Germany) and in Sensorless control of permanent magnet synchronous machines (Aalborg University, from Danemarca).

The Lecture on Simulation of Electromechanical Systems, for students from the forth year, concerns the elaboration of simulation models for power sources, static converters, electrical machines and their use in an assembled system. The simulations are employed in Matlab/Simulink. The Lecture on Electrical Machines, for students in the sencod year, concerns the study of the operation principals of electrical machines, classical and special ones, their supply and use in specific applications.

- control of electrical machines, based on scalar and vector control (FOC, DTC), sensored or sensorless;

- RCP (Rapide Control Prototyping) and HiL (Hardware in the Loop) concept implementation for real time analysis of electromechanical systems (based on dSPACE platforms);

- electric energy management based on hybrid sources (ultracapacitors and batteries);

- more than 60 articles in journal or conference proceedings, scientifically indexed;